The Chinese consumer electronics company Meizu’s Pro range is all about high-end flagship devices. However, the recent reports suggest that the company is all geared up to launch a not-so-flagship handset in the forthcoming weeks. 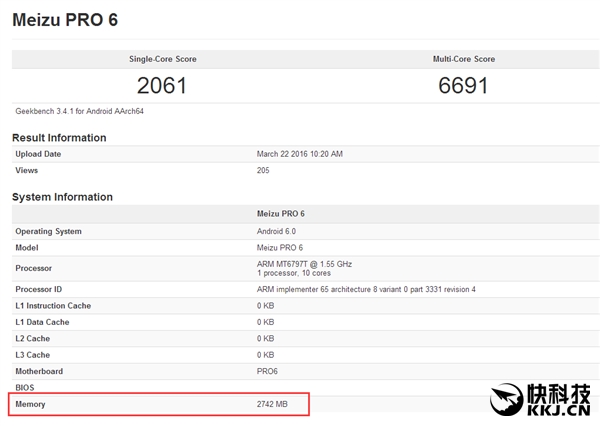 The Chinese company’s Meizu Pro 6 is a big hit in terms of functionality and internal specs. Recently, another variant of Meizu Pro 6 called the Pro 6 Lite has been revealed by a benchmark listing.

As per the listing, the handset features a design quite a similar to Meizu Pro 6 along with some usual specifications.

The listing has revealed that the low-powered Pro 6 variant will sport 3GB of RAM unlike the original handset with 4GB RAM. In addition, the benchmark listing has also disclosed that the alleged Meizu Pro 6 Lite will be fueled by Helio X25 SoC and will be run by Android Marshmallow 6 out of the box.

In terms of scores, the forthcoming Meizu Pro 6 Lite got 2061 point in the single-core test whereas the multi-test score is listed as 6691. Notably, the elder sibling scored merely 1800 in single-core and 6200-6300 points in multi-core test.

The original Meizu Pro 6 features a 5.2-inch display with 1920×1080p screen resolution. The handset comes with a metal body supported by 3D touch and sports 2560mAh battery backup. The handset also encapsulates mSound and HIFI Lite audio support and it will be powered by MediaTek Helio X25 chipset coupled with 4GB of RAM.

There is no information yet about the availability of the Lite variant, but rumors suggest it to be unveiled in 2016.