As MWC 2016 draws closer, the smartphone arena is rampant with news, leaks and rumors. In a fresh torrent of leaks, @evleaks has confirmed that Samsung Galaxy S7 and Galaxy S7 Edge will be revealed at the event in Barcelona. Evan Blass has also posted two new renders of the latest Samsung Galaxy flagships. 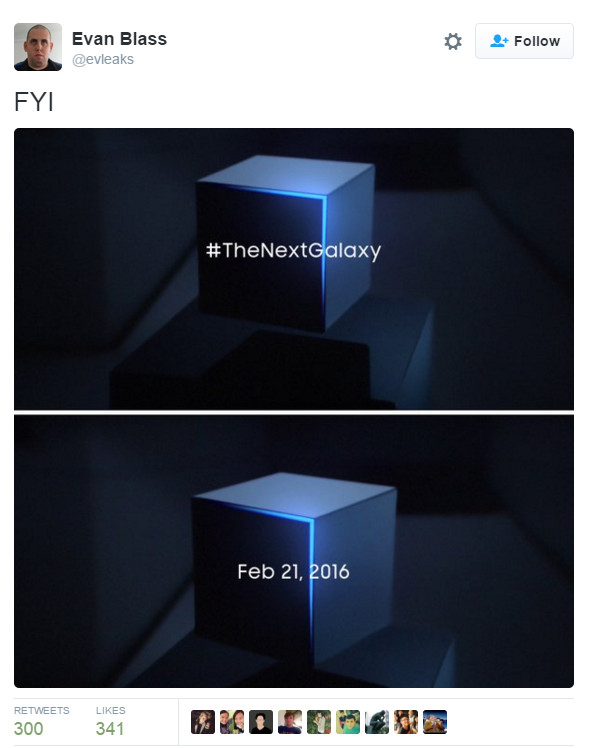 As per the trending speculations, Galaxy S7 and Galaxy S7 Edge are very similar in design to their predecessors. The new curvaceous edges in the latest models do not make them much different. The leaked renders also suggest that Samsung will offer some new colour choices to its users. However, looking at the pictures, the colours appear scarcely different from the older models.

The leaks have also confirmed that Samsung has scheduled its Galaxy Unpacked 2016 event for February 21. According to @evleaks, the release for USA and Europe has been scheduled for March 11.

Galaxy S7 will be equipped with 5.1-inches Quad HD Super AMOLED display, while the Galaxy S7 Edge will come with a larger 5.5-inches Quad HD Super AMOLED display. The two handsets will also be equipped with a 12MP back camera with f/1.7 aperture lens, 5MP front camera, 4GB RAM, an onboard memory of 32/64GB with microSD expansion and effective resistance for water/dust. The duo is expected to be powered by the Exynos 8890 chipset or the Qualcomm Snapdragon 820.

The new handsets are expected to transcend the battery life of their predecessors with their innovative and higher capacity batteries. Speculations suggest that Galaxy S7 will have a 3000mAh battery while the Galaxy S7 is expected to sport a 3600mAh battery.