Samsung Galaxy S7 Rumored To Land In Europe On March 11

The latest high-end smartphone flagship S7 by Samsung will hit the European markets on March 11. The date was announced by the popular leakster@ShaiMizrachi in his tweet. 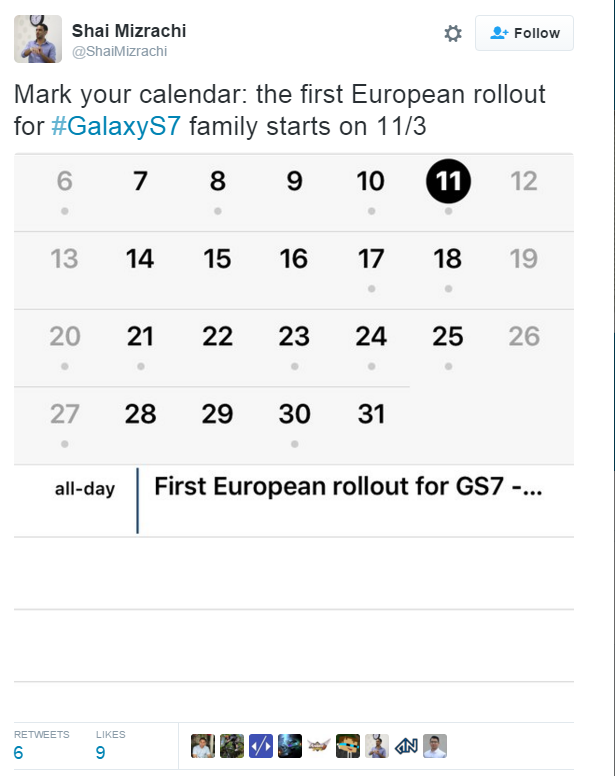 The newly announced date is in alignment with the speculated launch date for the US market. The news implies that the South Korean tech giant is preparing for a simultaneous international release.

This news bodes well for Samsung because previously the company had to wait till the mid of April before Galaxy S6 was launched in 2015.

Mobile World Congress 2016 is going to be organized in Barcelona, Spain in the coming month. The company has decided to release Samsung Galaxy S7 along with the edge version of the flagship at the event. However it remains to be seen that whether one or both smartphone versions go on sale on 17th of March.

In terms of specs, Galaxy S7 by Samsung is speculated to come with 5.1-inches display and 1440p screen resolution. The previous leaks suggest that the Galaxy S7 will feature either Snapdragon 820 or Exynos 8890. The device is also rumored to encapsulate a 12MP BRITECELL shooter and will sport 4GB of RAM. All in all, the device is expected to have same layout as Galaxy s6.

All Samsung admirers, especially those who are eagerly waiting for the Galaxy S7 launch, should mark their calendars as the device is all set to make its debut very soon.